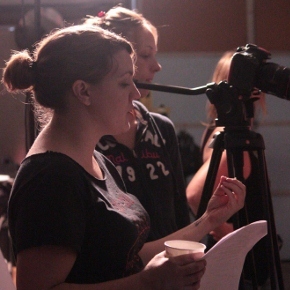 Courtney recently produced and was production designer on "Getting Schooled" (2017). She also served as producer and production designer on "Haunted Trailer" (2014). She has directed & produced 7 short films and one TV Pilot, most of which she wrote as well. Her short film “Hut Hut” is making rounds at film festivals and will appear on PBS in Season 36 of The Territory, and on ShortsHD.

Currently, Courtney is in post-production on a documentary about her real-life World Championship Armwrestling mother, and developing her action/family film project "Kids vs. Zombies". She was named one of Houston's "100 Creatives" in 2014 by the Houston Press.

Courtney also has a Master's Degree in Public Administration and brings to the table experience working with state and local officials as well as managing major events and media for low-budget high-impact social service agencies.

"So, My Mom is an Arm Wrestler"  and "Restorative Justice" are produced jointly with LOESCH PRODUCTIONS: